I’ve been doing some 3D printing for my next keyboard project and I’ve got a workflow that I’m pretty happy with that I’d like to share.

When I first started trying to make models a month ago, I tried Blender. It’s an amazing beast, but after a few hours of tutorials it was clear that it would take a while to get proficient with it. Also, it is really designed for interactive modeling and I need something that I can programmatically tweak.

A couple of friends suggested OpenSCAD, which is touted as “the programmers’ solid 3D CAD modeler.” It provides a power set of primitive shapes and operations, but the language itself leaves a bit to be desired. This isn’t a beat-up-on-SCAD post, but a few of the things that irked me were:

Fortunately, Matt Farrell has written scad-clj, an OpenSCAD DSL in Clojure. It addresses every issue I had with OpenSCAD and lends itself to a really nice workflow with the Clojure REPL.

To get started using it, add the dependency on [scad-clj "0.1.0"] to your project.clj and fire up your REPL.

All of the functions for creating 3D models live in the scad-clj.model namespace. There’s no documentation yet, so in the beginning you’ll have to look at the source for model.clj and occassionally the OpenSCAD documentation. Fortunately, there really isn’t much to learn and it’s quite a revelation to discover that almost everything you’ll want to do can be done with a handful of functions.

Here’s a simple model that showcases each of the primitive shapes:

Evaluating this gives us a data structure that can be converted into an .scad file using scad-clj.scad/write-scad to generate a string and spit.

We’re going to use OpenSCAD to view the results. One feature of OpenSCAD that is super useful for this workflow is that it watches opened files and automatically refreshes the rendering when the file is updated. This means that we can just re-evaluate our Clojure code and see the results immediately in another window: 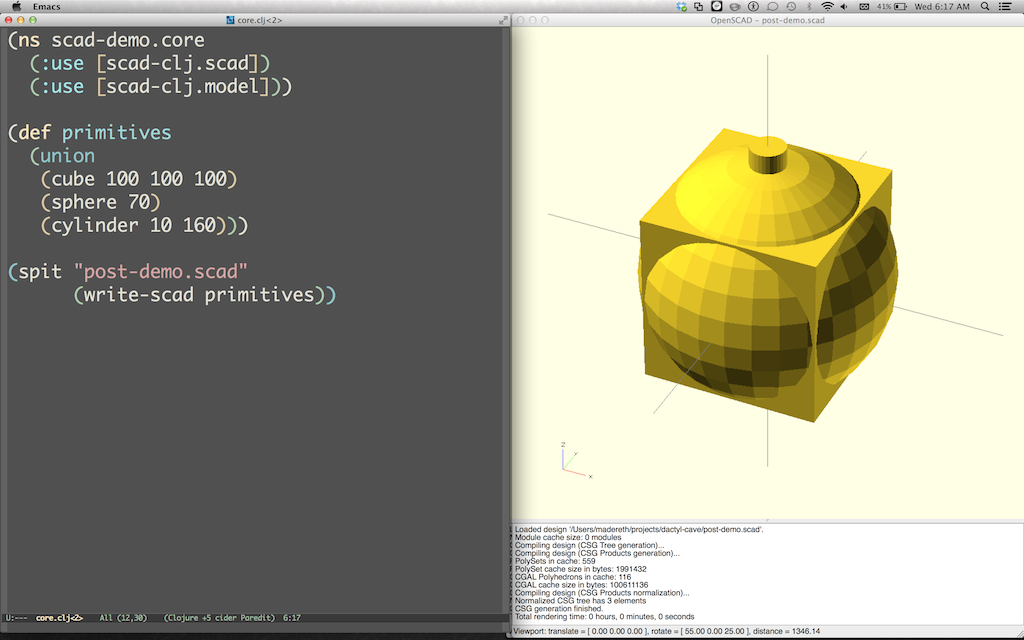 scad-clj makes all new primitive shapes centered at the origin. We can use the shape operator functions to move them around and deform them: 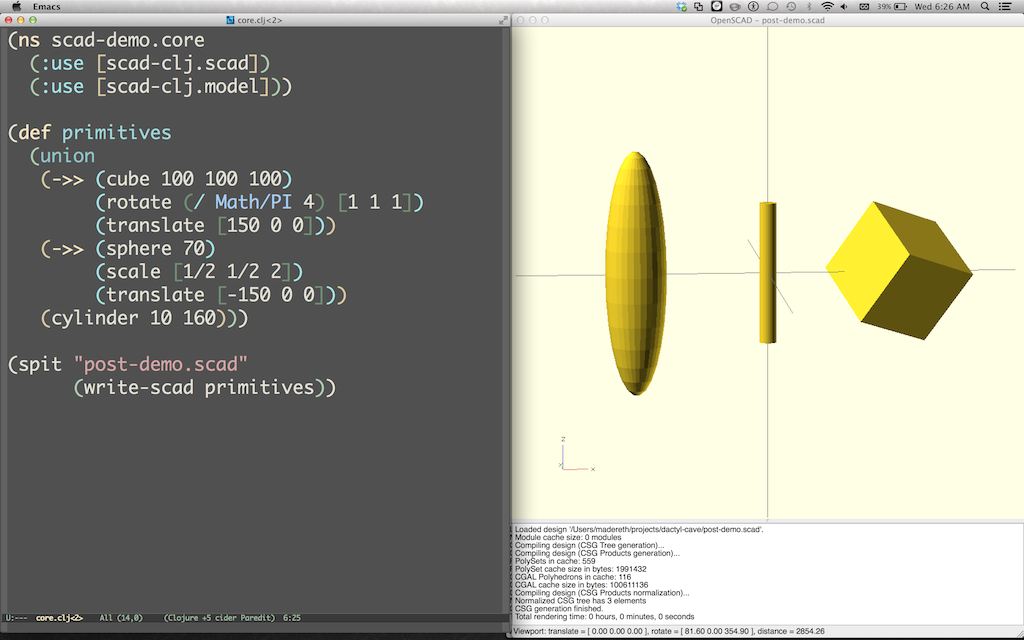 I snuck union into those examples. Shapes can also be combined using intersection, difference, and hull. It’s pretty incredible how much can be done with just these. For example, here’s the latest iteration of my keyboard design built using clj-scad: 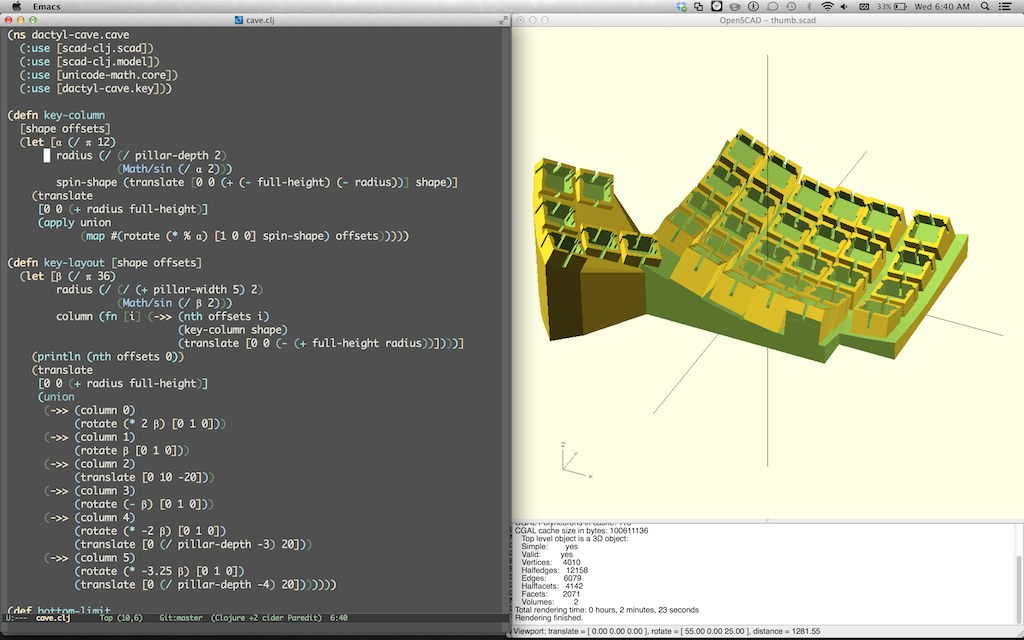 Once your design is complete, you can use OpenSCAD to export it as an STL file which can then be imported to software like ReplicatorG or Makerware for processing into an .x3g file that can be printed: 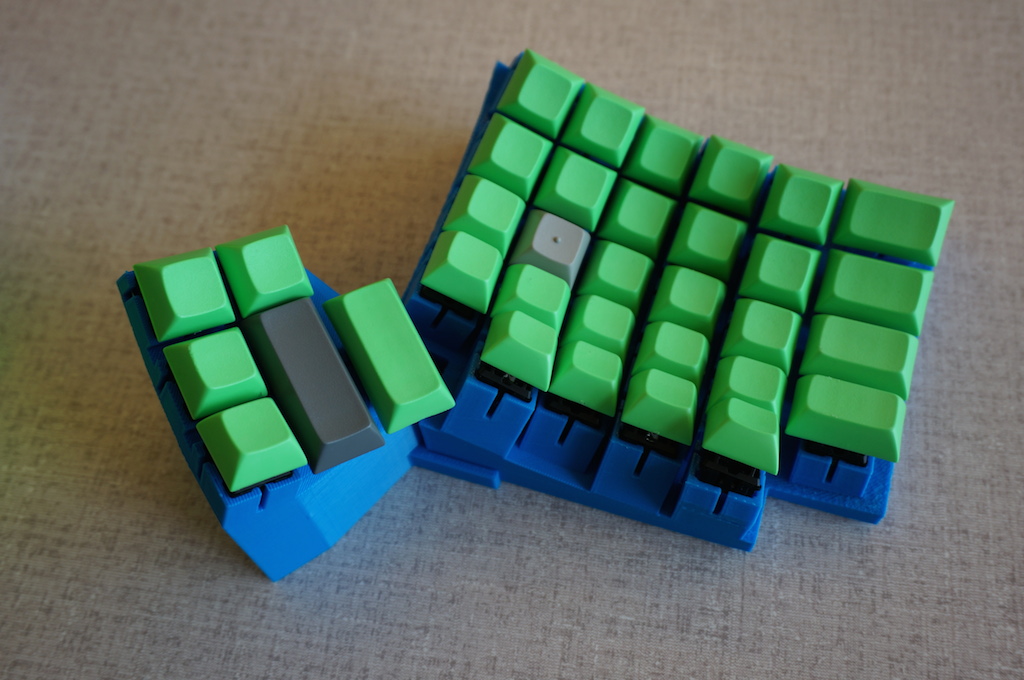